In summer of 1966, Joan Griffis was recruited by the National Association of Broadcasters to work as an on-air teacher in American Samoa. For the next two years, she worked in Pago Pago, American Samoa, teaching English as a second language, with her lessons being broadcast to high schools on all of the American Samoan islands. She then spent an additional two years at the Feleti Teacher Training school—later the American Samoan Community College—where she and a small staff worked closely with Samoan high school students, helping them prepare for college on the mainland, while also conducting teacher training classes. In 1970, she returned to the continental United States.

Over the course of four years in American Samoa she also shot more than 1,200 slides, with a major interests being traditional Samoan crafts and life. “When it was appropriate we used some of the slides in my televised English lessons,” she now says. “Samoa was changing rapidly and many of the traditional crafts were not being taught to Samoan youth.”

The eighteen slides in this online collection depict the process of making siapo, as bark-cloth is known in Samoa. The slides were donated by Ms. Griffis to the Pacific Collection in 2009, in conjunction with another major gift to the University of Hawaii Library: A full-size siapo piece made by Mary Pritchard, one of world’s preeminent makers of traditional bark-cloth, and the person most often credited for reviving the nearly lost art in Samoa. Sort by "Title" to view the images in chronological order.

Commercial use of any of the property in the collection is prohibited without specific written permission from the Donor. The Donor retains all literary, artistic and intellectual property rights for material in the collection. NOTE: Donor has obtained no consent from any person portrayed in any photograph for the public display of his or her image. Copyright is retained by the creators of these materials, their descendants, or the repository if copyright has been signed over, as stipulated by United States copyright law. It is the responsibility of the user to determine any copyright restrictions, obtain written permission, and pay any fees necessary for the reproduction or proposed use of the materials. See the Usage Rights information page for further details. 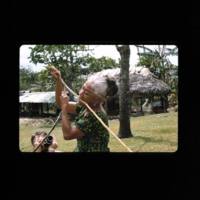 [01] Stripping the bark from a mulberry branch 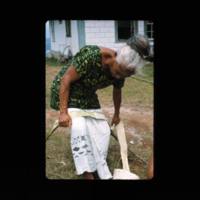 [03] Separating and discarding the outer bark 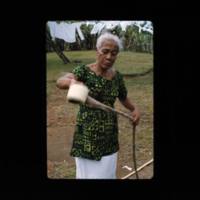 [04] Rolling up the inner mulberry bark 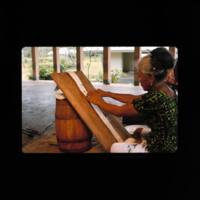 [05] Softening fiber roll with water and pounding it… 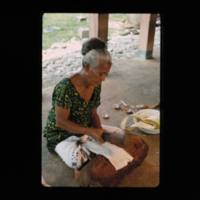 [06] Pounding the fiber until paper thin and smooth 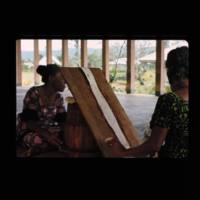 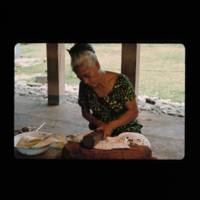 [08] Pounding strips together to make a larger piece of… 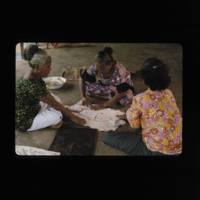 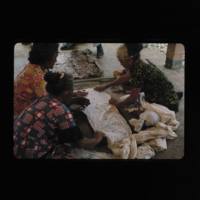 [10] The combined piece of cloth is placed on a tapa… 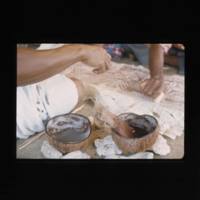 [11] Dye is made from various roots and plants 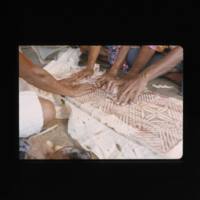 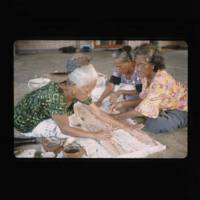 [13] After dying, a second layer of cloth is applied 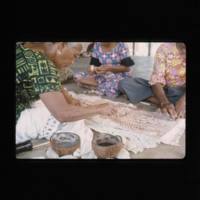 [14] Holes are patched and a third layer is applied… 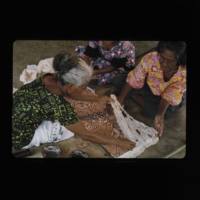 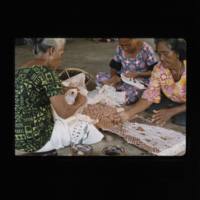 [16] The new layer is partially applied 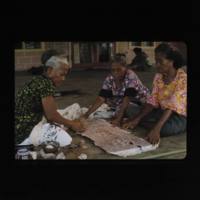 [17] Holes are patched and dye is applied 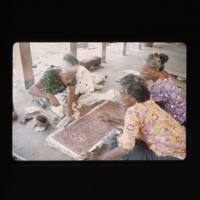 [18] The siapo is removed from the board and dried.