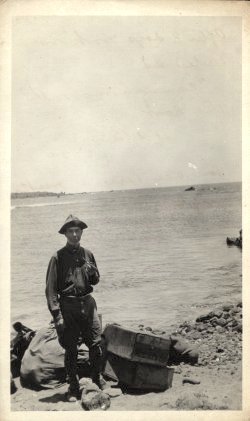 William Alanson Bryan Jr. was a former professor of zoology and geology at College of Hawai´i. He arrived in Hawai´i in 1900, taking a post at the Bishop Museum, which he held until 1907. He then joined the faculty of the College of Hawai´i, the predecessor to the University of Hawai´i, where he remained until 1919. During that time, Bryan, a Quaker, prohibitionist, and an active man of affairs, ran unsuccessfully for Governor of the territory in 1913 and 1917.

When his wife, Elizabeth, died in 1919, Bryan took leave of absence from his college post and travelled to South America to, in his words, recover from the loss. In December 1919, he took up an offer to travel to Easter Island on the company ship Falcon and to write an assessment of the business there for the managers of the property, Williamson Balfour, whose subsidiary in Chile had the exceptionally apt name of Compania Explotadora Isla de Pascua, The Exploiting Company of Easter Island. It was either lack of knowledge of Spanish nuance or open honesty that led them to this name in the early part of this century.

After his eight day stay from 14 to 22 January, 1920, Bryan returned to Santiago, Chile, and sent the collection of his photographs to his sister-in-law, Nellie Netson, in the USA. Bryan described his parcel as containing "a couple of hundred negatives that I made on the Pascua trip". As a result of his trip, he published popular accounts in The Sun and the New York Herald of 6 August 1920 (p. 4) and there is a reference, but no clipping, to the same piece appearing on 26 June 1920 in the Honolulu Star Bulletin. There was also a brief zoological note about his trip, published in the Proceedings of the Hawaii Entomological Society IV (n. 3, September 1921):460-464. In his archive papers, there is a copy of his extensive report on Easter Island and its prospects.

After his trip, Bryan returned to his post in Hawai´i to attend the Pacific Science Congress of 1921, the first, it is believed, at which he presented his Easter Island zoological findings. Whilst there, he received a very tempting offer and advancement in his career, which he he eagerly accepted.

Bryan left Hawai´i to take up the Directorship of the Los Angeles City Museum, a post he held from 1921 to 1940. When he arrived at his new position, he drafted a paper "Easter Island: A call for study material", which may have been sent out, although there are no details about this proposal. His proposal was to make his museum a gathering place for material about Easter Island.

He died two years after his retirement. A 1994 letter from Christopher B. Steiner, Assistant Curator of Anthropology at the Natural History Museum of Los Angeles County, the successor to Bryan's institution, states that body has no "materials from Easter Island or donated by William A. Bryan. We do have ethnographic holdings from Hawai´i (which are all potentially subject to repatriation under federal law), and we have some small collections of bird specimens and shells".